2018 the Most Successful Year to Date as WEEE Ireland collects 36,131 Tonnes of E-Waste

Irish consumers and businesses contribute to saving of equivalent of 220,000 tonnes of CO2

19 June 2019: WEEE Ireland, Ireland’s largest electrical and battery recycling scheme, surpassed national targets once again in 2018, with consumers and businesses collecting a total 36,131 tonnes of e-waste and 856 tonnes of waste batteries for recycling. The scheme’s annual report, published in conjunction with its AGM today, revealed that WEEE Ireland, its members and partners, recycled the equivalent of 10.2kg of e-waste per head of population last year, a new national record.

At a time when the country has declared an official climate emergency, WEEE Ireland’s 2018 recycling efforts contributed to a saving of equivalent of 220,000 tonnes of CO2 emissions as compared with the same items being diverted to landfill – the equivalent of 865 million kilometres driven by passenger vehicles, or the annual carbon consumption of 4,398 hectares of trees. With Ireland’s national WEEE collection targets under the EU WEEE Directive rising to 65% for 2019, WEEE Ireland has faced the challenge head-on, with a 65% collection rate already achieved on behalf of their members. This comes in the context of volatile commodity markets and challenging uncertainty in the British and Irish marketplaces.

Among the items recycled were an estimated 3.2 million lamps and lightbulbs, 195,000 televisions and monitors and 13 million small appliances. 48% of all the e-waste recycled was large household appliances such as dishwashers, ovens and washing machines which can be returned to retailers for recycling upon delivery of new appliances. This is a truly green story as WEEE recycling activity happens close to home. WEEE Ireland supports indigenous recycling facilities with WEELEBEX certified recycling partnerships, including KMK Metals Recycling in Tullamore, and Irish Lamps in Athy.

Commenting on the best year yet for the WEEE Ireland compliance scheme, Leo Donovan, CEO of WEEE Ireland said:

“It’s incredibly encouraging to see our continued progress for 2018, with Ireland again best-in-class in Europe for collection of our electrical and electronic waste. To see such a high level of progress year-on-year is a testament to the commitment to the cause of e-waste recycling on the part of consumers and businesses. In particular, the increased rates of collection through retail outlets and at our Local Authority sites show that the message is hitting home on the contribution that individuals can make.

Mr Donovan added: “We are extremely proud of these results and want to thank every person who recycled even one item of e-waste. As we move towards legislation to implement the Circular Economy principles, it’s amazing to see 83% of material collected be recovered for use again in manufacturing. However, we can’t become complacent. We will only achieve long-term change and benefits for the environment if we continue to manage our e-waste responsibly. At WEEE Ireland, we have a number of programmes and initiatives ongoing to ensure that people are informed and have easy access to recycle their WEEE.”

The report reaffirms WEEE Ireland’s position as the country’s leading electrical and battery recycling scheme, continuing to surpass EU targets on both e-waste and battery recycling. By providing excellence in recycling, WEEE Ireland is driving the highest standards in compliance services and yielding environmental results that Ireland can be immensely proud of. Through the proper environmental management of the 36,131 tonnes of e-waste WEEE Ireland collected, almost 19,000 tonnes of iron were recovered. The 827 tonnes of copper recovered equates to almost 148 million €1 coins.

Ireland and all other European Member States have new Circular Economy legislation to implement over the next 12 months. This will increase municipal waste recycling and recovery targets but also focus activity more on waste prevention, repair and reuse as well as eco-design and recovery.

Donovan added: “It’s also reassuring all small electrical waste is recycled at our operator’s state of the art facilities right here in Tullamore, recovering resources for use again in manufacturing. All other waste appliances and batteries collected by WEEE Ireland are prepared for recycling in Ireland with final processing carried out at specialist partner plants”.

WEEE Ireland also surpassed EU targets in waste portable battery collections, with 48% take back rate which is 856 tonnes of waste portable batteries collected for recycling. This marks yet another year of success for the LauraLynn ‘Small Things Matter’ campaign and is testament to how the ‘Blue Box’ has become synonymous with battery recycling in schools, retailers and businesses across Ireland. 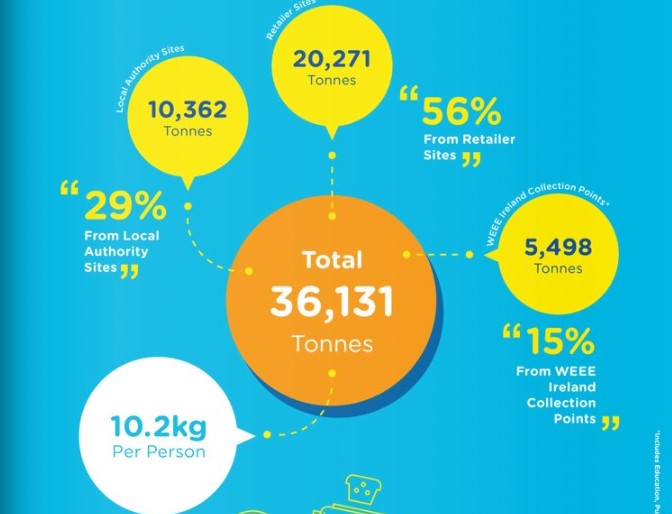 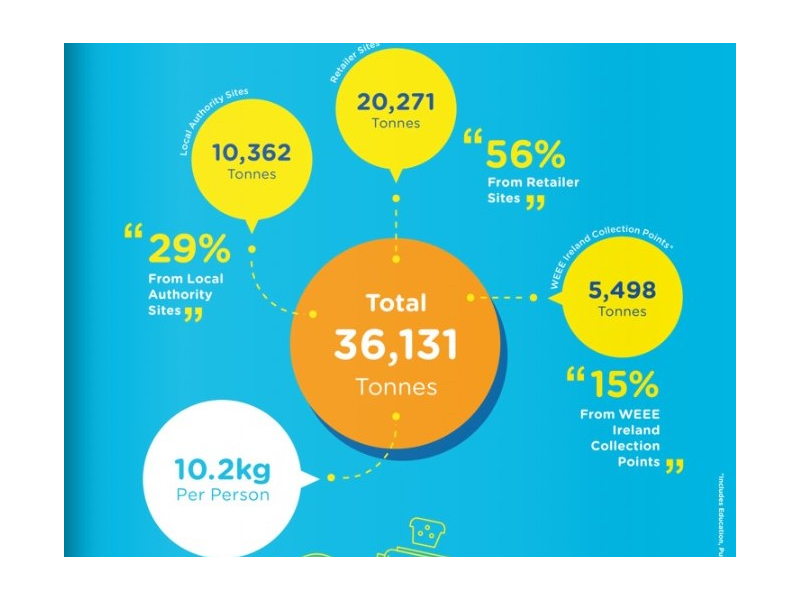